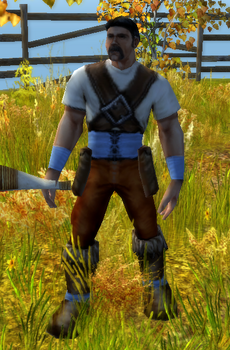 The Worker is the basic unit of the Norsemen. Poor fighters, Workers are some of the only Norseman units able to erect buildings and harvest resources, making them, like all Workers, absolutely invaluable.

Workers are the only units capable of harvesting resources and erecting buildings. Produced in the town center, they will as a rule defend themselves if attacked, but if they are currently engaged in erecting a building they will first finish that building before defending themselves. They are equipped with a sling for ranged defence. An upgrade increases the damage they do when attacking enemy buildings.

The Workers main strengths lies in their ability to erect structures and harvest resources. For the Norsemen, the only other way of building is to hire the hero Nikolaj Taslow, and the only other way of harvesting is to produce a Mammoth harvester, which collects wood and food. They are absolutely invaluable in setting up a base. They have a mid-range attack, but it does little damage, and they have no business actually attacking enemies, although an upgrade available at  the Town centre will increase the damage they do to enemy buildings.

Despite their physical weakness, their ability to erect useful structures can be used in the heat of battle. If they are not killed, they can quickly set up buildings such as Towers (although a Tower may not be complete during the battle) and Bunkers to help fight enemies, Temples and Magic cauldrons to heal your own army, and even Barracks or Animal farms to produce new fighting units on the battfield. In this strategy, it would be useful to give healing priority to these Workers.

They can also be used, with the necessary defence, to constantly expand your base and its frontiers, until your highly-defended main gate and unit production is right on your enemy's doorstep, resulting in a state of constant fighting. A less full-frontal version of this strategy would be to transport some Workers, and a token defence force, to an unclaimed area on the opposite side of the enemy's base, and set up a second base there, eventually allowing you to attack the enemy from the front and from behind.

Of course, in all of these strategies Workers will need to be kept around to repair the buildings. Against AI, if the Workers arrive moments after dedicated combat units, the enemy will not specifically attack them; however, if playing against another person, the other player can of course choose to target your Workers.

Nikolaj Taslow's level two buff is an aura which causes Workers in his vicinity to erect buildings and repair faster, and Jarvis Babbit's level five buff has the same effect on a global level, both of which can be very useful for the above strategy, and in quickly setting up or repairing a base. The Governor's level five buff increases the hitpoints and weapon damage of all Workers, allowing them to better defend themselves.

Retrieved from "https://paraworld.fandom.com/wiki/Worker_(Norsemen)?oldid=5807"
Community content is available under CC-BY-SA unless otherwise noted.