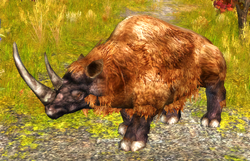 The woolly rhino or woolly rhinoceros is a neutral wild animal found in the Northlands and the Icewastes. It is the base animal for the Norseman Battle rhino, Rhino transporter, and Ballista rhino.

The woolly rhinoceros (Coelodonta) was a large Ice Age mammal found in northern Eurasia during the Pleistocene. Growing to a length of about 3.5 m, the wooly rhino had long shaggy fur and two horns, the larger of which was located at the tip of the snout and ranged up to 1 m in length.

Retrieved from "https://paraworld.fandom.com/wiki/Woolly_rhino?oldid=5411"
Community content is available under CC-BY-SA unless otherwise noted.