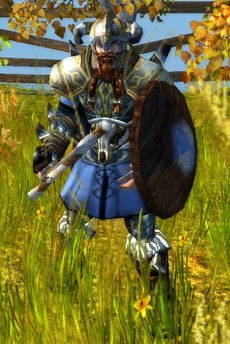 Warriors are the basic combat units of the Norsemen. Defensive close combat fighters, they are not very flexible, but deadly in hordes. They have a special skill, Defensive Mode, which lowers their speed but increases their defensive skills against ranged units such as Archers.

A basic, cheap infantry unit produced in the barracks. This is the Norsemen's basic infantry unit and is available from Epoch 1 onwards.

Retrieved from "https://paraworld.fandom.com/wiki/Warrior_(Norsemen)?oldid=5356"
Community content is available under CC-BY-SA unless otherwise noted.