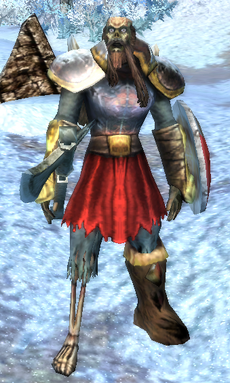 The Undead warrior is both a unique unit fought as an enemy in the campaign mode missions Valley of the Gods and A Cold Day in Hell, and, with the Boosterpack, a Norseman infantry unit unlocked with Heinrich Kleemann.

Resurrected corpse of an honorable warrior consecrated upon his death to the continued defense of Valhalla. Their weapons appear extremely dangerous and they swing them with insane rage. If not for the dead look in their eyes and the odour of decay they could almost pass for normal warriors. It is impossible to talk to them as they have long since lost the ability to speak or even think.

Retrieved from "https://paraworld.fandom.com/wiki/Undead_warrior?oldid=5790"
Community content is available under CC-BY-SA unless otherwise noted.