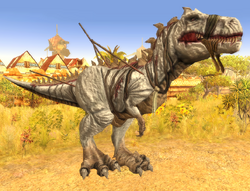 Since the arena Tyrannosaurus is only fought with the three heroes, the only real strategy is to do as much damage as possible as quickly as possible. All three heroes' special moves will be useful, especially Stina's, which will put the Tyrannosaurus to sleep for some time.

This Tyrannosaurus is fought as a boss in The Arena, being released after the other animals, infantry, and cavalry waves have been killed. It is not actually killed ingame, but in a cutscene, as the mission's gameplay ends when its health reaches a certain (very low) point, not when it is dead.

The Tyrannosaurus Rex was a large, bipedal carnivorous dinosaur found mainly in North America during the late Cretaceous period. The largest land predator to ever have lived, the Tyrannosaurus was a fast and ferocious hunter ranging up to 15 m in length and weighing up to an estimated 8,000 kg. The name Tyrannosaurus Rex means "tyrant-lizard king".

Retrieved from "https://paraworld.fandom.com/wiki/Tyrannosaurus_rex_(arena)?oldid=5580"
Community content is available under CC-BY-SA unless otherwise noted.