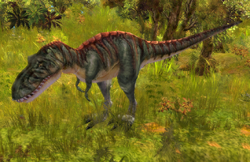 Tarbosaurus is an aggressive wild animal found in the Jungle, added in the Boosterpack.

Tarbosaurus lived during the Late Cretaceous and is a member of the tyrannosaurid family. It is similar to its more famous relative, Tyrannosaurus and indeed a few palaeontologists believe it should be classed as a species of Tyrannosaurus. Tarbosaurus is slightly smaller than Tyrannosaurus and is more lightly built for speed. Its remains have been found in Mongolia and China, where it lived alongside Velociraptor and Gallimimus.

Retrieved from "https://paraworld.fandom.com/wiki/Tarbosaurus?oldid=5860"
Community content is available under CC-BY-SA unless otherwise noted.