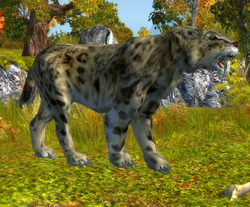 Smilodon is an aggressive wild animal found in the Northlands and the Icewastes.

When the player's heroes first enter Viking Park, a Smilodon is attacking a Cottage and a Worker. It must be killed by the heroes as part of a quest. Later, Béla Andràs Benedek is killed by a Smilodon in a cutscene, and must be reproduced at the Tavern. After this, the player is given a quest to kill all the Smilodon and destroy their nest.

In order to advance, a pack of Smilodon must be killed by Stina Holmlund and some Spearmen after they attack a Eusmilus. Their nest must also be destroyed.

There is a subquest in this mission involving a Smilodon. One lives in a mountain pass in the middle of the island, and if it is killed it drops an artefact. The encyclopedia reveals that this Smilodon killed the Arch Druid's girlfriend.

The Smilodon was the largest of the saber-toothed cats, weighing in at 200 kg and growing to a length of 1.2 to 1.5 m. This carnivore lived in Europe and North America during the early Quaternary Period. 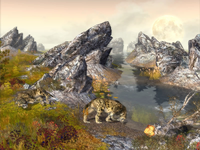 Add a photo to this gallery
Retrieved from "https://paraworld.fandom.com/wiki/Smilodon?oldid=5420"
Community content is available under CC-BY-SA unless otherwise noted.