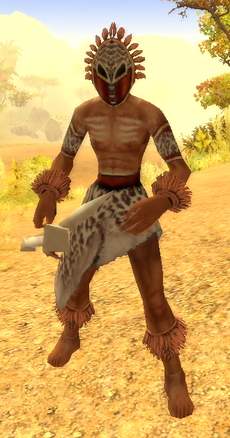 The Shaman is the healing and support unit of the Dustriders. Unlike the Druid and the Monk, he cannot actually heal injured units without the use of an upgrade; instead, he can resurrect dead units.

Produced in the Temple, the shaman has the unique ability to resurrect dead units. This must be done manually, it is not automatic. Resurrections take awhile to complete and block a pyramid slot just like a production order would. If all of the corresponding pyramid slots have been filled with units produced while the resurrection was in process it will fail. Shamans do not fight.

When standing still and not otherwise occupied, Shamans can also detect traps and hidden units.

The strategy for the Shaman is very different to that for the Druid or Monk, on account of the vastly different abilities. Since they cannot heal injured units,when using the Dustriders the player must rely solely on the Temple or on a hero such as the Arch Druid for healing. This inability to heal is made up for not only by the resurrection ability, but also by the Shaman's ability, like the other Dustrider infantry units, to erect structures like a Worker, allowing structures to be built during the heat of battle. Although the Shaman cannot use his abilities whilst building, his lack of a constant healing ability makes a brief incapacitation less dangerous than with, say, a Druid.

The most infamous strategy involving Shamans is to use two of them along with one or two Tyrannosaurus Titans, resurrecting the Titans upon their deaths, resulting in an essentially unstoppable unit(s).

Retrieved from "https://paraworld.fandom.com/wiki/Shaman?oldid=5649"
Community content is available under CC-BY-SA unless otherwise noted.