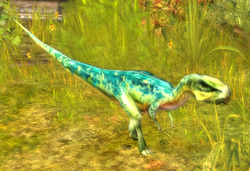 Psittacosaurus is an wild animal found in the Jungle. Although described as a small carnivore, in real life the Psittacosaurus was a herbivorous dinosaur. It never appears in any maps in the base game, but is sighted in one cutscene where it ignores the heroes. In game it is shown with a mostly blue and green body.

Found during the early Cretaceous period, the Psittacosaurus or "parrot lizard" grew to lengths of up to 2 m with a height of about 1.2 m and a weight of about 80 kg.

One of the most extensively studied dinosaurs, Psittacosaurus is known from over 400 fossils across Asia. It is a basal member of the ceratopsid family, a relative of giants such as Triceratops and Styracosaurus and lived in the Early Cretaceous. While they lacked the frills and horns of later ceratopsians, they possessed a heavy beak, cheek spines and batteries of chewing teeth, all of which are ubiquitous to the family in general. In recent years, it was discovered that Psittacosaurus had quills across its tail and was mainly reddish brown in colour.

Retrieved from "https://paraworld.fandom.com/wiki/Psittacosaurus?oldid=5852"
Community content is available under CC-BY-SA unless otherwise noted.