The Pirates are a non-playable antagonistic faction in Paraworlds campaign mode. Functionally, they are the Dragon Clan, but with unique SFX for their infantry units and flags, like the Dustrider Amazons. They are alllied with the Society for the Exact Alternative Sciences, and are fought in The Holy City, Pirates and Hostages (in which their Pirate Ship is a boss), and The Water Temple. In the Boosterpack, they are fought in A Cold Day in Hell, and are the playable faction in Operation Neptune, although again they function no differently to regular Dragon Clan units.

They are led by the Pirate Captain and appear to be based in a tropical jungle archipelago somewhere in the ocean west of the Holy City, although they are mobile enough to follow Heinrich Kleemann to the Icewastes. The islands are dotted with their outposts, and their main stronghold includes a dungeon, a large village built on stilts over the bay, and a strong wall and gate in the water, defending the bay. They have also built a large boom to defend a strait near their base, and leave floating minefields in their seas. They practice slavery.

They ally with the SEAS after being ambushed in an attempt to rob Kleemann, and break into and loot the Holy City with the SEAS' help. They escape the city with several high-profile hostages, but are apparently defeated when the heroes pursue them, destroy their ship and dungeons, and force them to capitulate. A small group of pirates led by the Captain secretly follow the heroes to a desert island to seek revenge, but they are all killed by Taslow Towers.

They may be based on a few historical Chinese pirates, or the maritime Southeast Asian pirates that were common in the Java Sea islands and the jungles of Borneo until the late 19th Century.

Spearman.
Add a photo to this gallery 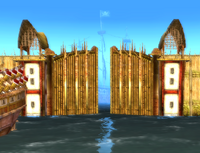 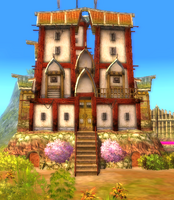 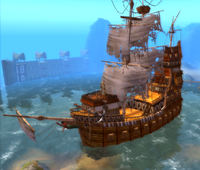 The Pirate Ship.
Add a photo to this gallery
Retrieved from "https://paraworld.fandom.com/wiki/Pirates?oldid=5229"
Community content is available under CC-BY-SA unless otherwise noted.