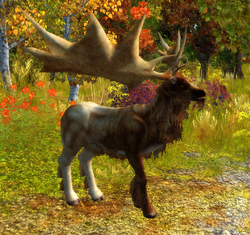 Megaloceros is a passive wild animal found in the Northlands and the Icewastes. It is the base animal for the Norseman Scout and Chariot. Due to its passive nature, weakness, and ubiquitousness, it is typically the main food animal of the Northlands.

Megaloceros giganteus, often called the Irish Elk, is an extinct deer found throughout Europe during the Pleiocene, Pleistocene and Holocene. Standing approx. 2 meters at the shoulder and weighing in at over 700 kg it had the largest antlers ever recorded - a full 4 meters in width.

Retrieved from "https://paraworld.fandom.com/wiki/Megaloceros?oldid=5423"
Community content is available under CC-BY-SA unless otherwise noted.