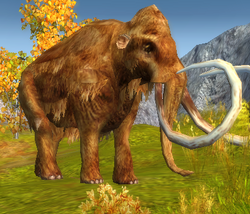 The mammoth or woolly mammoth is an neutral wild animal found in the Northlands and the Icewastes. It is the base animal for the Norseman Battle mammoth, Mammoth harvester, and Log cannon, the Norsemen's best cavalry units outside of their Titan.

The majority of this mission is based around defending five herds of mammoths from being killed by Dustrider poachers. Each herd lives in a different area of the island, and if more than a few are killed by the Dustriders, the level will be a failure. After saving all the herds, the player unlocks the three mammoth units of the Norsemen.

Mammoths were large, shaggy-haired herbivorous members of the elephant family found throughout the world during the Pleistocene. Reaching heights of up to 4.3 m and lengths of up to 6 m, Mammoths had recurving tusks which could reach lengths of up to 5 m.

Retrieved from "https://paraworld.fandom.com/wiki/Mammoth?oldid=5419"
Community content is available under CC-BY-SA unless otherwise noted.