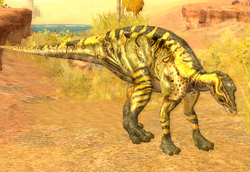 Maiasaura is a passive wild animal found in the Savannah. They are one of the most common dinosaurs in this climatic area.

The Maiasaura, whose name means "good mother lizard", was a herbivore which lived in North America in the late Cretaceous period. Up to 9 m in length, 2.5 m tall and weighing 3 to 4 tons, the Maiasaura was a duck-billed dinosaur with bony crests located in front of the eyes.

Behind the Scenes Edit

Maiasaura has the same color as Anatotitan from the documentary Walking with Dinosaurs.

Maiasaura was discovered in 1978 when a huge nesting colony was unearthed. Over 200 individual animals were found, including eggs, hatchlings, young and adults and their nests. Until this discovery, it was believed dinosaurs abandoned their young to fend for themselves. However Maiasaura showed that dinosaurs were very caring parents and older juveniles helped in rearing younger individuals. Maiasaura also had solid bony crests above its eyes, a feature common in its family of hadrosaurs, the Brachylophosaurini. These crests may have been used in headbutting contests.

Retrieved from "https://paraworld.fandom.com/wiki/Maiasaura?oldid=5854"
Community content is available under CC-BY-SA unless otherwise noted.