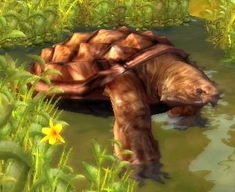 Macrochlemys or Macroclemys is a neutral wild animal of the turtle class, native to no particular habitat.

They spawn at Swimmer Nests, and are amphibious, the only swimmers to be so.

The Dustriders use Macrochlemys as a method of amphibious transportation, in place of a Transport Ship.

"The Macrochlemys was a small carnivor[ous] turtle which grew to about 1 m in length and lived [on] aquatic plants and shellfish."

Subsisting on aquatic pants and shellfish, Macrochlemys are semi-aquatic animals which are as much at home on land as in the water - they are somewhat faster when in the water. Otherwise, they are extremely slow. They will fight back when attacked, and are fairly durable, but can do little to truly fight off aggressors.

Macrochlemys make clacking noises as they walk, and communicate, or otherwise vocalise, via bellows and low roars.

Macrochlemys makes no appearance as a regular animal in any level or map, although Transport Turtles do in most levels featuring the Dustriders.

At a speed of 1, Macrochlemys are among the slowest entities in the game, and are the slowest wild animals, perhaps tied with Gigantopithecus. They are neutral, and will fight back if they take damage, but do only

Macroclemys is the scientific name for an alligator snapping turtle. It appears that the Macrochlemys within the game is a hypothetical giant variant of the snapping turtle.

Retrieved from "https://paraworld.fandom.com/wiki/Macrochlemys?oldid=5816"
Community content is available under CC-BY-SA unless otherwise noted.