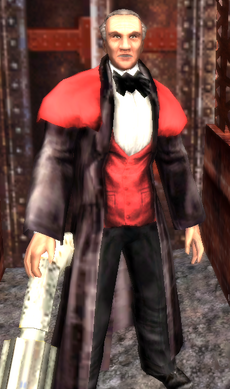 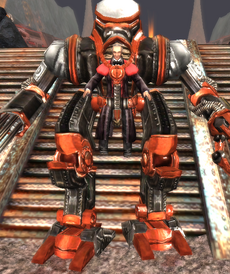 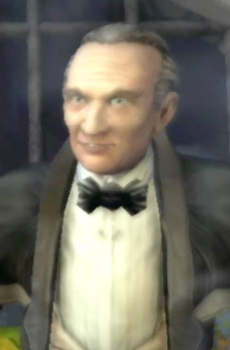 Units in vicinity do more damage to enemy buildings

Jarvis Babbit is the primary antagonist of Paraworlds campaign mode, and the leader of the SEAS. He is an infantry hero unit, although he can only be used in multiplayer mode, not in any mission of the base game or the Boosterpack. He is fought twice as a boss in Showdown!, in the form of the SEAS Scorpion and his personal Exo Enforcer.

Jarvis Babbit is a cold, yet brilliant scientist with morals and ethics more suited to Victorian England than today's world.

Jarvis Babbit was an English mathematician, analytical philosopher and scientist who would seem to have been the first person to come up with the idea of a programmable computer.

Born in London in the late 18th century, he graduated from Cambridge in 1805. A few years later Babbit helped found the Analytical Society and later won the Gold Medal of the Royal Astronomical Society "for his invention of an engine for calculating mathematical and astronomical tables". For many years he worked as a professor of mathematics at Cambridge. He contributed largely to several scientific periodicals, and was instrumental in founding both the Astronomical Society and the Statistical Society. During the later years of his life he resided in London, devoting himself to the construction of machines capable of performing arithmetical and even algebraic calculations.

It was during this time that Jarvis Babbit gradually became ever more reclusive, drawing back from public life. His research turned to the esoteric, many said, and he eventually founded the SEAS, the Society for the Exact Alternative Sciences. His few friends were heard to remark that his lifestyle must have been most healthy indeed, as he hardly seemed to age at all. Little is known of his later years, although he is thought to have died in 1871.

In 1815, whilst a student at Cambridge University, Babbit discovered some lost documents which seemed to indicate the existence of another universe which could be entered by "gateways", which appeared at random and could be predicted by astronomical observation. As analytical mathematics was not a subject very heavily researched at that time, Babbit and two colleagues founded the Analytical Society, a front for the Society for the Exact Alternative Sciences, to find sponsors and like-minded scientists without subjecting themselves to public ridicule. The Catholic Church's 1821 decision to allow dissemination of Copernican documents greatly helped Babbit in his research, as did the discovery of the Rosetta stone, allowing ancient Egyptian documents to be translated, the following year.

By this time Babbit had begun to design a "Difference Engine" for calculating the appearances of gateways mechanically, and had actually witnessed the appearance of a gateway or "permeation". The Difference Engine succesfully predicted the appearance of two further permeations, but this was offset by three false predictions. Test subjects could be sent through the gateways, but never returned. The SEAS returned to basic research, whilst Babbit, who was also by this time publishing several books, began to design a more accurate machine - the Analytical Engine, in essence a modern computer. He may have met Ada Loven around this point, who acted as his right hand, performing translations and mathematical calculations. She became the SEAS' de facto second-in-command.

In 1846, the planet Neptune was discovered, solving Babbit's problem - his calculating machine had been working perfectly, but the calculation itself had been missing a major celestial body. With the correct data, the Analytical Engine could perfectly predict the appearances of gateways. Babbit himself, accompanied by a single helper, was the first to enter the other world. Although they encountered many difficulties, Babbit was able to apply his theories to the other world and find a gateway home by astronomical observation. After over a year in the other world, the pair returned to Earth in October.

The SEAS then spent a few years preparing for a larger expedition, which ended up being based in the Ash valley. A permanent base was set up, and the SEAS scientists began to design a Submarine to explore the other world unseen by the natives. Ada's death was faked, and she permanently took up residence in the other world. Another early SEAS scientist, Heinrich Kleemann, was expelled for secretly bringing the author Jules Verne into the other world in exchange for sponsorship. At the same time, following Ada's example, Babbit faked his death and began to live in the other world. He had already been taking extended trips there for years, meaning he had aged little since his sixtieth birthday. Shortly afterwards, Ada recommended explorer David Leighton for a job in the SEAS' military.

In 1884, brilliant engineer Nikolaj Taslow arrived in New York and attracted the attention of the SEAS. Babbit commissioned him to build a machine capable of actually generating gateways, which would allow easier travel between the two worlds. Taslow built the gateway machine in a year, and he and Babbit celebrated into the night; at some point in the celebration, Taslow discovered Babbit's military ambitions, and was so enraged that he destroyed the machine and its blueprints, burned down his workshop, and began a crusade against the SEAS.

Following his work with Taslow, Babbit took an extended leave from Earth. When he returned, the First World War was raging, and Babbit was appalled with the changes. By the time of the Second World War, he was seriously considering leaving the Earth forever, and after Taslow accused Babbit of partial responsibility for the state of the world by his example of "flight and exile", the SEAS finally faked his death, kidnapped him, and dumped him in the other world.

In order to prevent others from discovering the other world, the SEAS began to offer grants for unusual research projects. If the project turned out to be connected to the gateways, the researchers death was faked and they were exiled to the other world. He also began to work on an enormous volcano jet to push the planet slightly out of orbit, which he believes will stop the gateways from materializing.

In his London mansion, Babbit meets three scientists who he suspects may discover the other world; Anthony Cole, a geologist who has discovered a spot on an Indian reservation where the rock is twirled and intertwined; Stina Holmlund, a biologist who has discovered modern Triceratops scales and a type of unicellular organism believed to be long extinct; and Béla Andràs Benedek, an astrophysicist who has discovered immense gravitational irregularities which directly suggest the existence of a second world. The SEAS have been secretly supressing their work for some time, and now Babbit, convinced that they are dangerous, has Ada take them into the other world with the intention that they be killed.

Leighton is summoned to meet with Babbit on his Carrier to discuss the escape of the three scientists.

Babbit does not physically appear in the mission, but is mentioned in Ada's journal entry. She helped the three scientists to escape in the hope that they will stop Babbit's volcano jet plan, but Babbit himself assumes she accidentally let them escape. Leighton is suspicious, but Babbit simply believes that Ada slipped up.

A Cold Day in HellEdit

Babbit and Leighton decide that the SEAS will directly deal with the three scientists, instead of allowing Ada to stop them.

Hearing that the scientists are headed to the Holy City, Babbit has Heinrich Kleemann send the newly-recruited pirates to sack the city and kill them.

Babbit tests the volcano jet, which works succesfully and causes an eruption in the desert near the Holy City, causing several deaths and releasing poisonous gasses which infest a lake and kill dozens of animals.

Babbit and Leighton again meet with Ada, this time in London. Babbit demotes Ada and has her placed in "protective custody", and criticizes her for jeapardizing all their work. However, he clearly still does not believe that Ada intentionally betrayed him.

Babbit's journal entry appears before the start of the mission. He confirms that he thinks Ada only made a mistake, and is loyal to him, despite Leighton's suspicions. He laments the fact that he has "lost" her to "a Swede, a Hungarian, and an American", and explains his belief that knowledge of the other world and the gateways is dangerous knowledge, and that someone must preserve it and be the leader - something he's been doing for hundreds of years.

Babbit waits for the Governor in the temple of the Holy City, sitting on the throne and smoking, and reminds him that all the Governor has he owes to the SEAS. He then criticizes the Governor for not disposing of the three scientists, and tells him to make up an excuse for sending them off to the temple ruins, where the SEAS will take care of them directly. He reminds the Governor that if the scientists are not dealt with, they are both in danger, then leaves.

Ada reveals Babbit's plan to use the volcano jet to knock the planet out of orbit to the scientists, who decide they must stop him.

After the scientists and Ada defeat the SEAS army, storm the crater headquarters, and set up Taslow with the Analytical Engine, Babbit tells them they cannot win and traps them near the rim of the volcano, then flies down in his personal Exo enforcer to try and kill them with the SEAS Scorpion, the first of two consecutive boss fights. Taslow sabotages the Scorpion's power, allowing three panels to be destroyed by the players units, followed by three different weapons of the Scorpion. After the Scorpion is destroyed, Babbit emerges in his Exo enforcer with the intention of ripping Taslow and his machine apart with his bare hands. The player must defeat him before he gets to Taslow; when Babbit is almost dead, the campaign ends and the final cutscene plays.

Babbit's Exo enforcer stumbles backwards into the volcano, leaving him hanging from the railing by his hands. Cole attempts to save him, and Ada begs him to take Cole's hand, but he refuses, not wanting to live in the modern world, where "honourable combat between men has been sacrificed for wholesale destruction" and "airplanes fly faster than sound, but no one has the time to smell the flowers along the way". He then willingly lets go of the railing and plummets to his death in the lava below, laughing.

The mobile suit is a SEAS unit which can be built by the Coach Builder. Effective against all units.

Large and powerful, this animal unit can be deadly when carrying archers. It is actually a SEAS unit. While the triceratops transporter is as powerful as a T-rex or a Brachiosaurus in its own way its strengths lie in areas differing from the others. Triceratops transporters are produced on large dino farms. 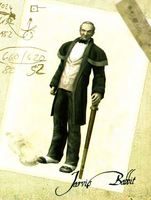 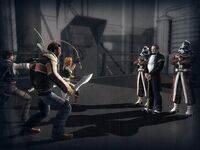 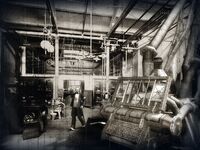 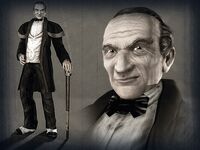 Add a photo to this gallery

Retrieved from "https://paraworld.fandom.com/wiki/Jarvis_Babbit?oldid=5563"
Community content is available under CC-BY-SA unless otherwise noted.