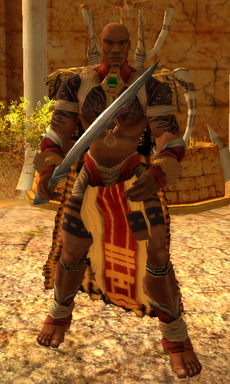 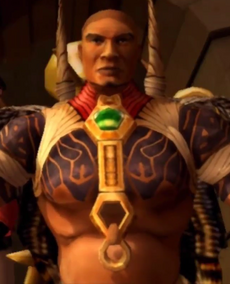 Causes area damage around him

Damage caused by nearby enemy units is reduced

Workers become better fighters: increased HP, weapon does more damage
Voiced by
Neil Kaplan (English)
The Governor or Mayor is the tertiary antagonist of Paraworlds campaign mode. He is the corrupt ruler of the Holy City, who is in league with the SEAS. He is also a hero infantry unit, although he never appears ingame in the campaign, and can only be used in multiplayer mode.

The governor is the illegitimate son of the High Priest of the temple in the Holy City. Abandoned in the desert as a baby he grew up a member of a small Dustrider clan which found him. And he really grew up - he is enormous. He finally worked his way up to the post of Mayor of the Holy City by gaining the council's trust through his many deeds in their service. Vain, he is well aware of his power and prerogatives.

Jarvis Babbit implies that the SEAS are responsible for the Governor's positions as Governor, but how they helped him is never specified. All that is known is that he is loyal to them, not to the High Council or the people of the Holy City. He is an accomplished arena warrior. After Heinrich Kleemann independently made his way into the other world, he gained the trust of the Governor.

The Governor agrees to see the three offworlder scientists Anthony Cole, Béla Andràs Benedek, and Stina Holmlund after they rescue several high-profile hostages taken by the Pirates. Presumably aware that they are enemies of the SEAS after they ask him about gateways, he makes up a prophecy on the spot and insinuates that they are "chosen ones" in order to lure them into the desert to die.

The three scientists do not die, and in fact fulfill the prophecy that the Governor had made up. Jarvis Babbit pays him a visit to criticize his failure to properly dispose of the three, and tells him to think up an excuse for sending them off to the temple ruins, where the SEAS will deal with them directly. Babbit reminds him that if the scientists are not taken care of, they are both doomed, then leaves. When the scientists return, the Governor makes up another prophecy, and sends them out with Heinrich Kleemann to die.

Although the Governor announces their death to the High Council, the scientists return yet again - during the announcement of their death, in fact - along with David Leighton, commander of the SEAS' military. They accuse the Governor of corruption and collaboration with the SEAS, which he strongly denies, although the council seems undecided. Eventually, the High Priest demands a trial by ordeal, and the scientists are forced to fight in the arena, with the Governor and Leighton watching from a private box.

After they slay the arena tyranosaur, the Governor himself goes down to fight Cole one on one, glaive against sword. The Governor has the upper hand at first, but Cole uses his agility to swap weapons, and the when the annoyed Governor makes a mad charge for him, he manages to stab him in the chest with his own glaive, killing him instantly. For a moment there is silence, then the arena erupts into cheers.

Retrieved from "https://paraworld.fandom.com/wiki/Governor?oldid=5798"
Community content is available under CC-BY-SA unless otherwise noted.