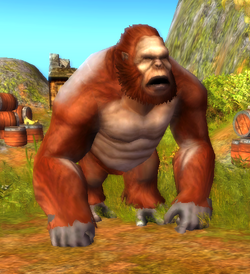 Gigantopithecus is an unlisted, unselectable wild animal that can be found in Pirates and Hostages on a small island full of barrels, which it uses as a form of ranged attack, in a reference to Donkey Kong. It is as powerful as a titan and even harder to kill, with 15000 hitpoints, the afformentioned ranged attack, as well as a melee attack - both of which cause area damage. However, the island it is found on also contains three randomised artefacts, and the Gigantopithecus itself yields 500 skulls upon its death.

In the Mapeditor, it is listed under Northland animals.

Retrieved from "https://paraworld.fandom.com/wiki/Gigantopithecus?oldid=5814"
Community content is available under CC-BY-SA unless otherwise noted.