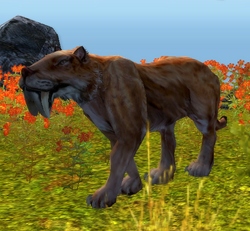 Eusmilus is an aggressive wild animal found in the Northlands and the Icewastes. It is the base animal for the Eusmilus rider used by all three tribes.

Near the beginning of the mission, a Eusmilus is being attacked by a pack of Smilodon, which are killed by Stina Holmlund and some Spearmen. The Eusmilus subsequently bonds with Stina, and she uses it as a mount, becoming a cavalry hero, although it does not appear in any further cutscenes. Ingame, her Eusmilus has a different model to the wild animals, with a shorter head and black stripes.

The Eusmilus was a sabre-toothed cat found in Europe, Asia and North America during the late Eocene. Growing up to a maximum of 2.5 m in length, these carnivores were known for their long, flattened sabres. 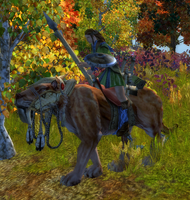 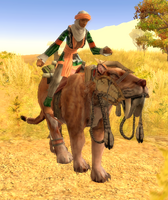 Dustrider Eusmilus rider
Add a photo to this gallery
Retrieved from "https://paraworld.fandom.com/wiki/Eusmilus?oldid=5421"
Community content is available under CC-BY-SA unless otherwise noted.