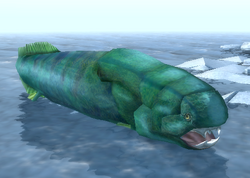 Dunkleosteus is an aggressive wild animal found in the Icewastes. They appear dead, as decorative objects, in the Pirate village in the Jungle, where they are being filleted and used as food.

Dunkleosteus was a placoderm which grew to an estimated six meters in length and had armor plates which were up to five centimeters thick. The skull was about 1.3 - 1.5 meters wide at the widest point.

Retrieved from "https://paraworld.fandom.com/wiki/Dunkleosteus?oldid=5772"
Community content is available under CC-BY-SA unless otherwise noted.