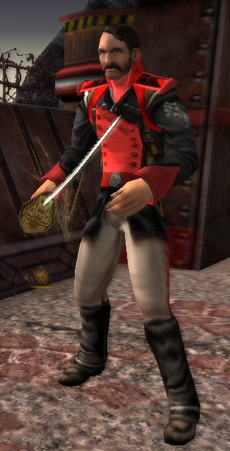 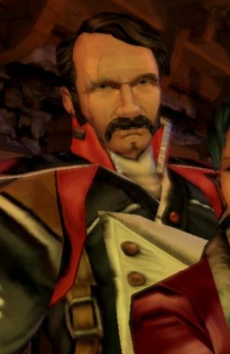 Heals himself by causing damage

David Leighton is the secondary antagonist of ParaWorlds campaign mode, as well as an infantry hero unit who is fought as a miniboss in New World Order. He becomes a playable unit with the usual hero buffs for each level in the Boosterpack, in which he is a protagonist.

Leighton was born in Glasgow, Scotland in the early 1800's and studied medicine and theology at the University of Glasgow. He later joined the London Missionary Society, becoming a minister.

Sent to Africa in the mid 1800's he had little success, making few conversions to the Christian faith. It was perhaps his failure in this respect which contributed to his growing fanaticism.

After a short return visit to England he turned to exploration. Leighton was one of the first Westerners to complete a transcontinental journey across Africa. The purpose of his journey was to open trade routes, whilst accumulating useful information about the African continent. Leighton was a fierce proponent of trade and missions to be established in central Africa, all of which ended in disaster.

Leighton returned to Africa years later as head of a large expedition. While Leighton was exploring a large African river he contracted a strange illness and eventually failed to reappear from an exploratory hike. The whereabouts of his remains is unknown.

According to Ada Loven, Leighton was recommended to Jarvis Babbit by Ada herself. She was his immediate superior until her betrayal. Heinrich Kleemann's journal entry in Operation Neptune suggests that Leighton often verbally mistreated Kleemann, and Babbit's journal entry in Pirates in Hostages describes him as a "cad", and states that Ada is old enough to be his great great grandmother.

Leighton waits for Ada inside her Viking Park cottage to tell her to dispose of the offworlders Anthony Cole, Béla Andràs Benedek, and Stina Holmlund in preperation for the arrival of some new SEAS recruits.

Leighton is the main hero unit and protagonist of this mission. He is summoned to meet with Babbit onboard a Carrier to discuss Ada's apparent betrayal, but must travel across an island inhabited by warring tribes of Norsemen and Dustriders to do so.

Leighton makes no physical appearance in this mission, but Ada's journal entry on the loading screen describes her meeting with Babbit and he after they discover her failure to dispose of the offworlders. Babbit did not realise that her "failure" was an intentional betrayal; Leighton was suspicious, but didn't say anything because he couldn't prove anything.

A Cold Day in HellEdit

In his meeting with Babbit, it is agreed that the SEAS will deal directly with the offworlders instead of allowing Ada free reign. Leighton, who is again the mission's protagonist, is sent to the Icewastes of the far north to find Heinrich Kleemann, a SEAS agent who has been doing archaeological excavations. He soon finds Kleemann, who refuses to leave until he has found the key to Valhalla, resulting in he and Leighton exploring the island, collecting runes, and fighting pirates. Kleemann and Leighton find the key after defeating the Avatar, and are cornered by the pirates until being relieved by SEAS forces. Leighton then forces the pirates to work for the SEAS.

Leighton emerges from a Warpgate, coming from an unknown location, in the Barbarian camp as it is being attacked by the player's Dustrider forces. He promptly retreats west, leaving Gunners to materialise through the Warpgate, potentially doing severe damage to the player's units.

Babbit and Leighton meet with Ada in Babbit's office. Leighton accuses her of failure, whilst Babbit demotes her, informs her that she will be taken into "protective custody", and critisizes her for jeopardising all their work. Leighton attempts to escort her out, but she slaps his hand away, and he waves sarcastically. Babbit's journal entry in the next mission, Pirates and Hostages, reveals that, although Leighton has voiced his suspicions of Ada's betrayal, he himself is still not convinced that it was anything more than failure, and has told Leighton to keep quiet.

Leighton is waiting in the old Dragon Clan temple ruins for Kleemann, assuming he has dealt with the offworlders: instead, he finishes his prayers in a makeshift office inside the ruins to find that the offworlders have overrun the outside SEAS base. They tell him of Heinrich's death and accidentally insult Leighton by assuming he is a henchman of the Governor, resulting in him telling them about the SEAS. They subsequently take him captive, intending to take him before the High Council of the Holy City.

The offworlders bring Leighton before the Governor and the High Council, and dramatically accuse the Governor of abusing his power and betraying the Holy City. They explain that, on their return trip, Leighton told them everything about the SEAS and their machinations. They are forced to fight in the city's arena to prove their innocence; the Governor watches from his box, with Leighton by his side, guarded and apparently still "under arrest". When Cole directly challenges the Governor, Leighton seems unhappy as he leaves the box to fight, then watches as he fights and is eventually killed. During the celebrations and chaos following the Governor's death, Leighton escapes the box and flees the Holy City.

Leighton does not physically appear in this mission, but he does affect the plot. According to Béla, one important piece of information he gave the offworlders during their return to the Holy City was the location of a Telescope tower on a nearby desert island, which could be used for surveying the stars. Although he was telling the truth, the tower is in fact a ruin. By the time the offworlders begin to repair it, he has seemingly alerted the SEAS to their activities, as an army attempts to kill them and destroy the tower. Soon afterwards, the "entire SEAS fleet" sails forwards to siege the Holy City.

Although some of the fleet is sunk by the Dragon Clan, much of the SEAS army manages to land on the beach close to the Holy City and establish a base, led by Leighton, who tells them to destroy any resistance, take no prisoners, and leave no survivors. The SEAS assault fails, and their base is destroyed by a counterrattack. During the chaos, Leighton approaches James Warden, who has been knocked from his Allosaurus, and kills him with a quick stab to the heart. He then calmly retreats from the ruined base in a Submarine. The others find Warden's body and decide to follow Leighton, after burying their friend.

Hot on Leighton's heels, the offworlders end up in a SEAS prison archipelago in the Ash valley, where Ada is imprisoned. Leighton has her moved from a low-security prison near the beach to the highest-security compound up in the highlands, where he sets up his base. The prisons on the islands are liberated by the offworlders, who succesfully storm the highland compound and free Ada. Although Leighton is knocked over by an explosive, he manages to escape the island in a Submarine, with Cole barely a metre behind him.

Leighton flees to the main SEAS base, and briefly stays in the crater headquarters, presumably to talk with Babbit. When the offworlders storm the base and come close to the crater gateway, Leighton emerges atop a CBT-1500, with several men and two Executioner MkII's, to make a last stand; he is subsequently fought as a sort of miniboss, along with the afformentioned units. In the succeeding cutscene, he is finally slain by Cole as the army storms into the crater.

Add a photo to this gallery

These are quotes and sounds that do not fit into either category. Included are Leighton's statements over the loudspeakers, and miscellaneous sounds not present ingame, only in the games files.

Retrieved from "https://paraworld.fandom.com/wiki/David_Leighton?oldid=5775"
Community content is available under CC-BY-SA unless otherwise noted.