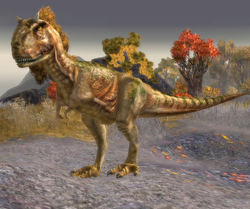 Carnotaurus is an aggressive wild animal found in the Ash valley. It is a medium sized carnivore with a mottled yellow and green body.

The Carnotaurus was a large carnivore found in South America in the early Cretaceous period. They grew to a length of up to 7.5 m and could weigh up to 1,000 kg. The name Carnotaurus means "carnivorous bull".

Carnotaurus is a member of the abelisaurid family, which evolved from earlier therapods such as Ceratosaurus. They lived primarily in isolated continents during the later Jurassic and Cretaceous periods, including South America, India, Madagascar, Africa and parts of Europe. These dinosaurs had vestigal arms, osteoderm armouring, deep skulls and often ornamentation on the head. Carnotaurus had distinctive horns on its head, most likely as a display feature, though they could also have been used for tussling with rivals. While its arms were tiny and relatively weak jaws, it had powerful legs which were used for chasing down small prey.

Retrieved from "https://paraworld.fandom.com/wiki/Carnotaurus?oldid=5858"
Community content is available under CC-BY-SA unless otherwise noted.