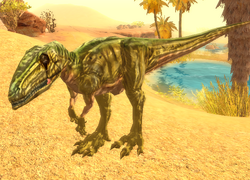 Carcharadontosaurus is an aggressive wild animal found in the Savannah.

The Carcharodontosaurus was a large carnivorous dinosaur found in North Africa during the Cretaceous period. They grew to between 8 and 14 m in length and weighed up to 8 tons. Massively built, it had short arms ending in three-fingered hands with sharp claws.

Retrieved from "https://paraworld.fandom.com/wiki/Carcharadontosaurus?oldid=5483"
Community content is available under CC-BY-SA unless otherwise noted.