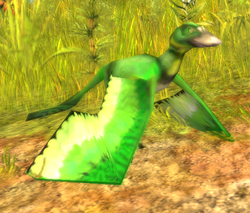 Archaeopteryx is a decorative flying reptile or dinosaur found in the Jungle. It also appears prominently in the opening and closing cinematics for ParaWorlds campaign mode, where on is shown living in our world.

The Archaeopteryx, whose name means "old wing", was found in Europe during the late Jurassic. This small flying carnivore grew to between 35 and 45 cm in length and weighed approximately 300 g.

Retrieved from "https://paraworld.fandom.com/wiki/Archaeopteryx?oldid=5537"
Community content is available under CC-BY-SA unless otherwise noted.