This article is a stub. You can help ParaWorld Wiki by expanding it.

The Amazons are a non-playable antagonistic faction in Paraworlds campaign mode who are fought in Amazon Island. Functionally, they are Dustriders, but with unique SFX for some of their infantry units, like the Dragon Clan Pirates. Only the male units receive redesigns with the Amazon SFX.

They are ruled by Queen Tarna and live on a small tropical desert island with a holy temple, one of which is called Aschnabar. They are defeated after kidnapping Barry, prompting the Norsemen to siege their temple and force them to surrender. Afterwards, the women are apparently taken as wives by the victorious Norsemen.

They are presumably based on the Amazons of classical mythology. In his gag dialogue, the Dustrider Warrior talks about being a male in an Amazon society, despite a clear difference being made between the Amazons and the regular Dustriders. This may be a reference to the fact that the Dustriders first become playable after some male slaves beg to join the heroes after the Amazons are defeated. 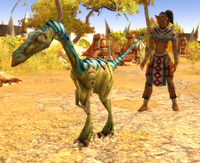 Velociraptor Handler.
Add a photo to this gallery

The Amazon Temple.
Add a photo to this gallery
Retrieved from "https://paraworld.fandom.com/wiki/Amazons?oldid=5232"
Community content is available under CC-BY-SA unless otherwise noted.